She is truly an awesome baby, I sometimes look at her and can’t believe she’s ours.

Ainsleigh is still talking up a storm, she is emalmost/em walking (she can now use a walking toy and walk on her own), and she is really enjoying the great outdoors (we play on the grass and went to the outdoor pool today).

I think the funniest thing that has started recently is that she has decided to use the dogs as an obstacle course (I promise to try and get some video). She climbs all over them and while Tess cares most of the time, Toby takes it like a man and let’s her do what ever she wants.

We have had some boo-boos with all the moving around she is doing. Earlier in the week, she fell out of the doggy door and cut her lip a little bit, the screams were much worse than the blood. This morning she closed her finger in a drawer, again the screams were much worse than anything. She might have a future as an actress. There have been a few other bumps and bruises but she is really brave and for the most part keeps playing and exploring.

I wanted to share a couple of photos. The first two are of Ainsleigh trying out whole milk. At one year, babies do not need formula (or breast milk) anymore. Since Ainsleigh is going to be going on a big trip right after her first birthday, I wanted to make sure she is fully adjusted to whole milk before we leave, so she got to try it for the first time today and guess what she liked it. That’s really reassuring and I feel good about weaning her a little early because she is emfinally/em eating well. She feeds herself lunch, snack and dinner everyday and let’s her daddy feed her yogurt in the mornings. She is doing so well feeding herself, so much so that she is down to three 6oz bottles a day.

The last photo is Toby who was banished to the back yard because he was begging at dinner time, he was pouting on top of the patio table, he’s such a strange boy. 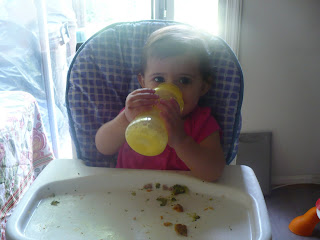 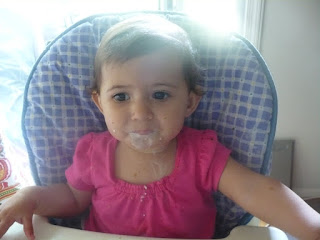 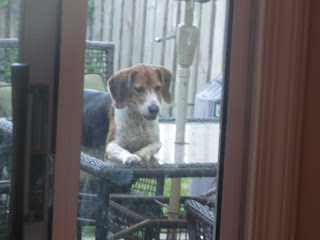 pOh, and one other funny thing Ainsleigh has learned, she knows how to undo the Velcro on her diapers and take them off. She had a poopy diaper at day care the other day and took off her diaper, which of course freaked out Maria her day care provider, but I thought it was pretty funny. At least she wanted to be clean, we might be doing early potty training after all.