Let me start at the beginning. Will and I actually knew each other in high school but did not hang out in the same circles. We had a few classes together and he adored me from afar, but I was in the dark about this affection.

We both went off to college and then when I moved back to Reno to get my teaching license we started running into each other just about everywhere we went.

We eventually exchanged phone numbers and went on our first date. From that day (July 19) we spoke everyday and quickly realized we had a great thing together.

Will helped me remodel my mom’s house which we lived in for almost two years until we made the moved to Las Vegas. Along with Will came Coco, his dog. 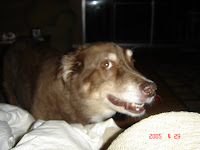 In the Spring of 2005 we added Toby Wilson into our lives. Here’s a picture of him when we first brought him home. He weighed about 5lbs and was smaller than Will’s shoes. 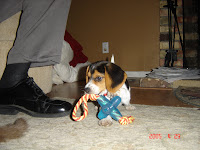 Shortly before we moved to Las Vegas, Coco was diagnosed with throat Cancer. We brought her to Vegas with us, but by August of that year she was getting very sick and we had to take her out of her pain.

At the same time, I went back to work and Toby was incredibly lonely without his sister and his mom, so the plans to bring Tessa Grace into our household began to unfold.

Tessa became a part of the family in October of 2005. She weighed about four pounds when she got off the plane and was a daddy’s girl right away. This is one of my favorite pictures of her, she is such a little pig, always wanting more food.

In March of 2006, we finally got engaged, Will had been planning it for a while and we picked out the ring together he was just waiting for the right moment to pop the question.

The big day started with Will suggesting a hike in the Valley of Fire and towards the end of the day, he asked a woman to take a photo of us and when he walked back towards me he got down on one knee. ~brownie points for life for remembering to ask someone to take pictures of the proposal~

And so the wedding plans began, but not before we decided to make a really big move to Alexandria, VA. We both always wanted to live on the East Coast and the Nations Capital seemed like the right place for us. Stay tuned for our adventures.